Just a small update on the progress of my comic. This week I received the rough thumbnails of the first volume. After some revisions, the artist came back with clean thumbnails to be used as test page. Here I upload one of the thumbnail for each version, rough & clean. 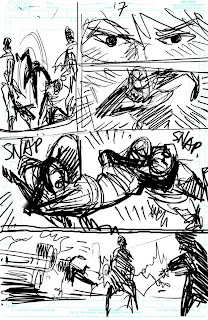 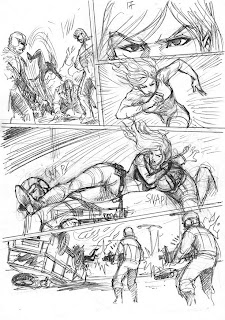 Heya fellows! It's been quite some times since my last update. As you might have read from my previous post that I've finished my screenplay. The thing is, finding a producer or director who's interested in my (an unknown writer) script is not an easy task. Couple this with the fact that my script requires a huge investment (a lot of scenes need special FX) and the current condition of our local film industry, I'm sure Indonesia is not a good place to start. I guess my script was born in the wrong time and at the wrong place.

Then I started to look for other media to deliver my story. The cheapest one would be rewriting my screenplay into a novel. But with a full-time job in a company with no relation whatsoever to arts (let alone fine arts) as well as having no talent in writing a novel, finally I resort to comic medium. From the cost viewpoint, it is more efficient than producing a feature film, that's for sure. But comic is not cheap to produce too. However, I already told myself since last year that "No matter what, I have to tell my story to the world!"

So, I shop around for local comic artist and I stumbled on a studio called Caravan. To cut things short, I've met the studio head (a nice bloke) and also seen some of their works (including the working environment). I decided to hire their service to realize my vision. I designate this project with a codename "U". Thus, this week is the starting point and I hope within the next one or two months the first volume will be ready. Wish me luck!!!^_^
Tidak ada komentar: